Travelling to new countries is one of my favourite things to do, but travelling to Reunion Island has opened my eyes to adventure in new places and oh boy does this island have a lot to offer for adventure seekers and adrenaline hunters!

Carlinn and I recently travelled to the French ruled country with the Reunion Island Tourism Board and 5 other bloggers, writers, film makers and photographers from around South Africa. Our mission, to explore the island’s culture, food and of course, adventure.

One of the highlights of the trip though, was that it fell over my birthday and what we got up to on the day, was something pretty special!

The morning started off with the fresh croissants, painau chocolat and coffee that had been prepared by our Guide, and now friend, Philippe who we’d already had the opportunity of hanging out with for a few days.

After breakfast we made our way through to the coastal village of Saint-Leu where we were then picked up in a shuttle and taken the top of a mountain 800m above sea level, we were about to go paragliding!! 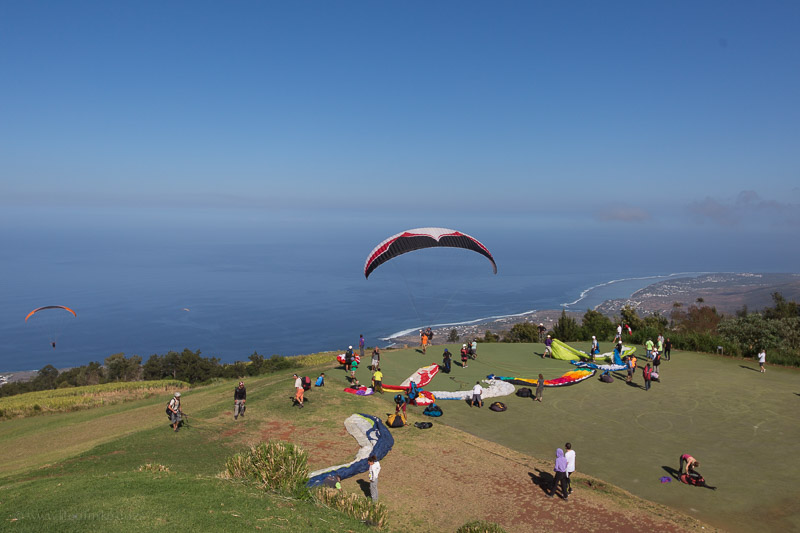 The experience itself is incredible and it kicks off with a short walk into a run, and next thing you know, you’re floating higher and higher above the sugar cane fields below. The feeling of just hanging around in mid-air with the wind blowing in my face and the ground moving further and further away was breathtaking, but it didn’t take long for my camera to come out and I spent most of the 30 minute flight snapping videos and photos!! 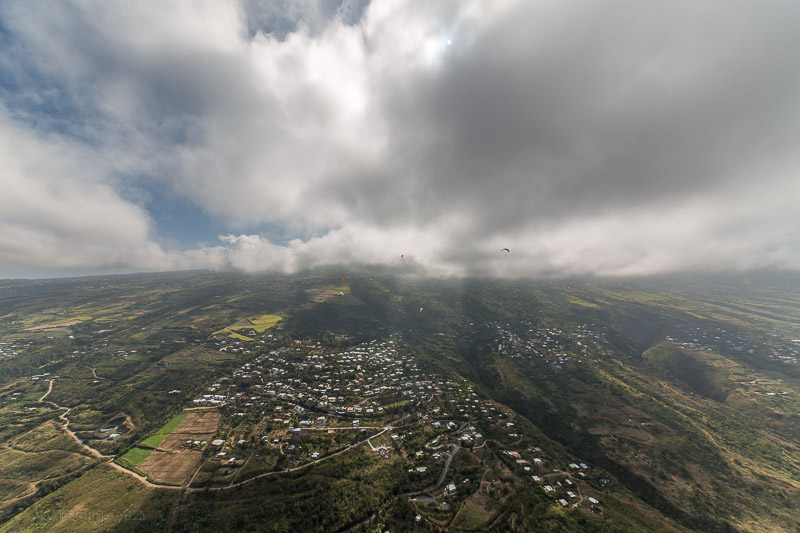 If you’re thinking of taking pictures with a DSLR while paragliding, I’d recommend the buying the Pro Sling Strap from JOBY as it will keep your camera safe from falling to the earth below and then make sure you’ve got a nice wide lens! I shot with the Sigma 12-24mm on my 5D iii and it took some epic photos and video! 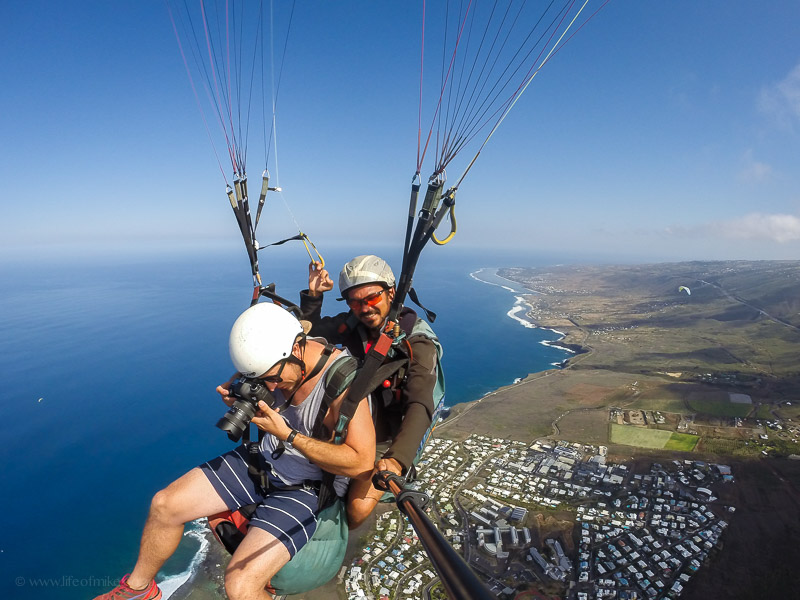 My pilot, Pascal, was awesome and aside from him positioning me perfectly in the beginning of the flight for a few of the photo and video angles I was looking for, he also managed to find an updraft within minutes and it shot us up an additional 150m. Before long, I floating above every other parachute in the sky and loving every moment of life itself! 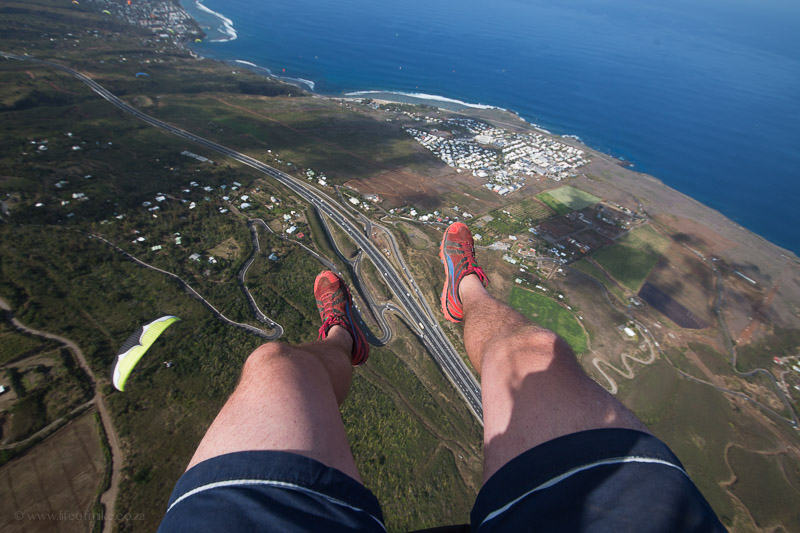 The updrafts are not guaranteed, but if you do hit one, your flight can be extended for an extra 10-15 minutes, so once we were above everyone else, it enabled me to get a few really cool photos. After our high altitude photo shoot he asked if I wanted the “sensation”, which means, he wants to do a fast trick whereby he spins the parachute around and around, causing serious g-force. It has to be one of the coolest roller coaster ride feelings I’ve ever felt in my entire life!

Here is a short 15 second clip of that “sensation” as it starts! We went from zero to who knows how fast in the space of a couple of seconds!

The top highlight from the flight was watching the rest of the bloggers take flight, especially Dee from The Good Holiday, since she is super scared of heights, but she faced her fears and still made it to the bottom in one piece after her screams echoed around the island for 20 minutes. Other highlights included the endless shoe selfie opportunities, feeling like I was on a roller coaster and of course, flying almost a kilometre above the ground. 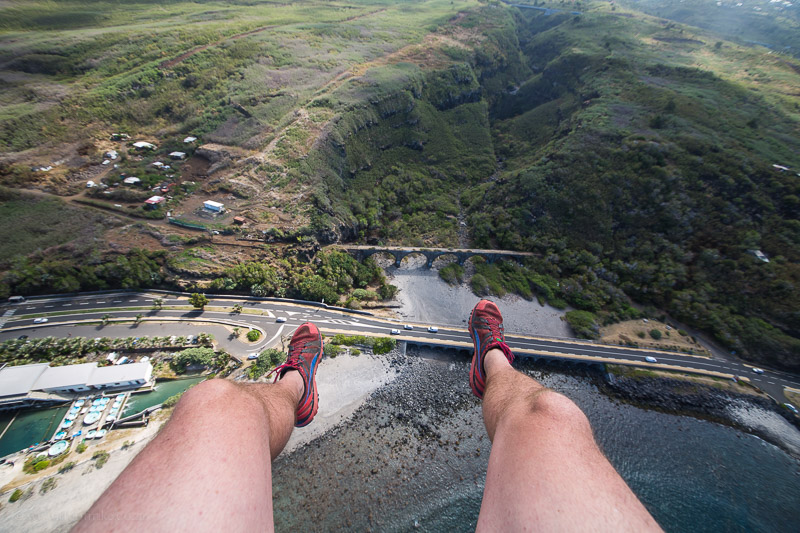 We landed on the beach safe and sound right next to a the Kelonia Turtle Conservancy and from there we explored a Creole Market, a pretty spectacular waterfall.

Later that night we were treated to a cocktails on the beach, a capoeira fighting demonstration and then a creole cooking experience back at our beach house, all of which I will talk about in future posts about the island. 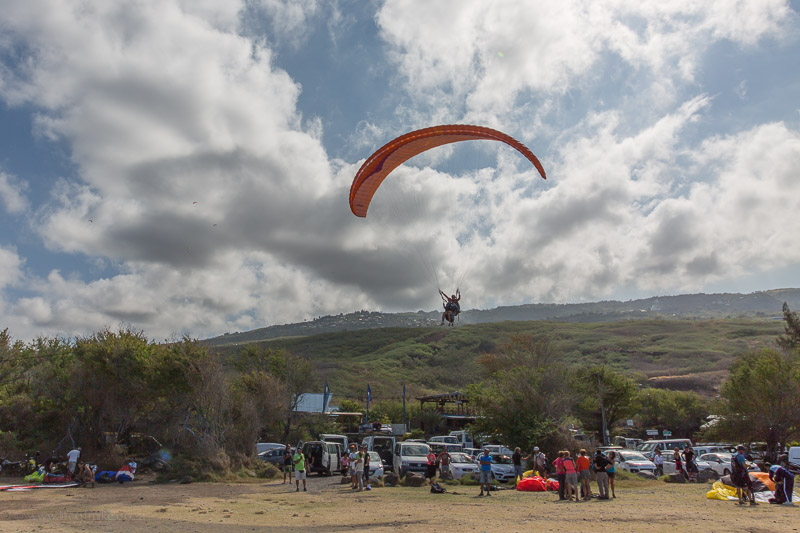 To go paragliding in Reunion Island, it will cost in the region of EUR65 for children and then depending on your take-off point and duration in the air, adults will pay between EUR75 and EUR110.

We flew with (Air Lagon Parapente) are professional and the best on the island, so get in touch with them if you are planning ton paragliding in Reunion Island. Check out their Facebook Page too.

Check out all the photos from the flight on my Facebook Page album.