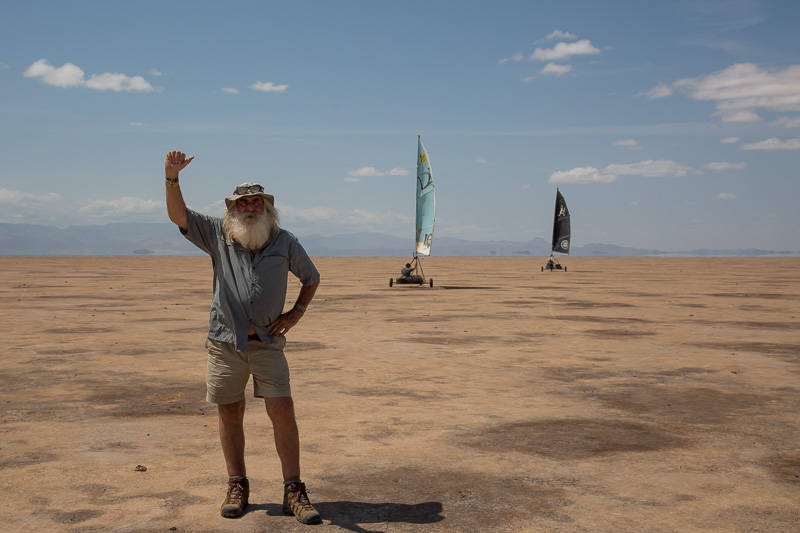 The day I was told by Kingsley Holgate that I would be joining the team on their adventure to sail across the Chew Bahir Desert in a Land Yacht, nothing could have prepared me for what would actually go down along the way.

There are really, so many stories that came from the 16 Days I spent with the guys (and Anna) on that trip through Northern Kenya and into Southern Ethiopia, but a certain highlight had to have been the 3 Days and 2 Nights we spent in the scorching heat of the Chew Bahir Desert with this objective:

TO CIRCUMNAVIGATE THE CHEW BAHIR DESERT IN A LAND YACHT!! 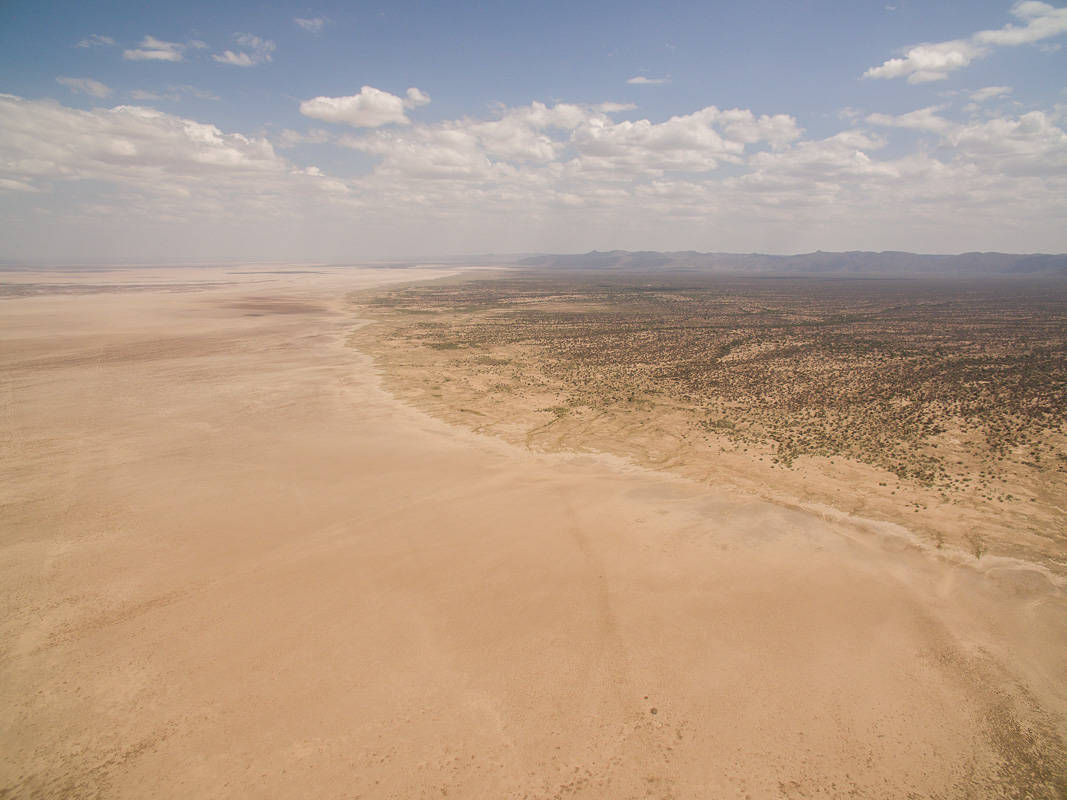 Before any Land Sailor can actually set off to sail through a desert though, there is one important ingredient that is needed, which we couldn’t find anywhere, wind…

We arrived in Chew Bahir around 1pm after leaving the town of Jinka where we had spent two nights before waiting for Patrick Cruywagen to join the expedition team. 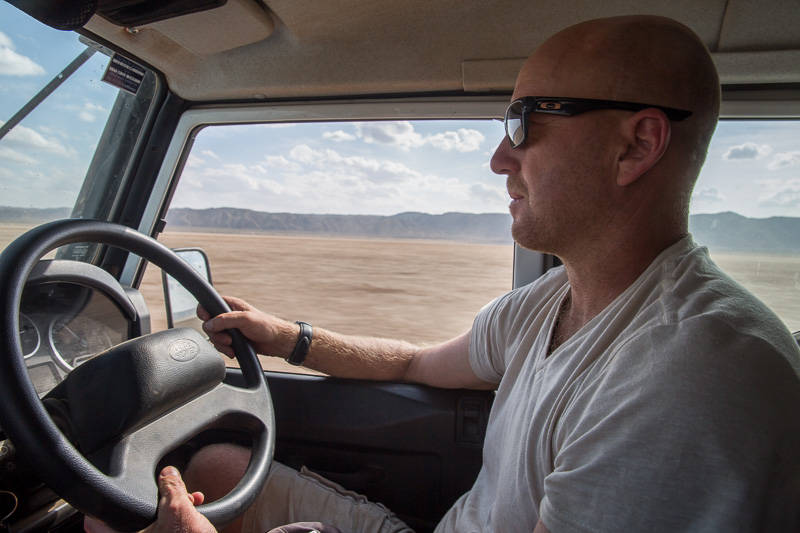 Patrick Cruywagen behind the wheel of the Defender

Upon getting out of the vehicle to set up a quick photo and video shot, the heat hit me! “Sh*t, that suncream I forgot is going to be a mistake”. But we were THERE! We reached the destination Kingsley, Ross and Bruce had set into their SatNav’s a 4 weeks before, Chew Bahir.

Chew Bahir is found around the dried up lake of Lake Stephanie in Southern Ethiopia and that desert has a lot of stories to tell, considering the amount of fossilized Nile Perch bones we found lodged into the hard crusted desert floor as well as animal carcasses from cattle and goats that strayed off to their death into the desert. 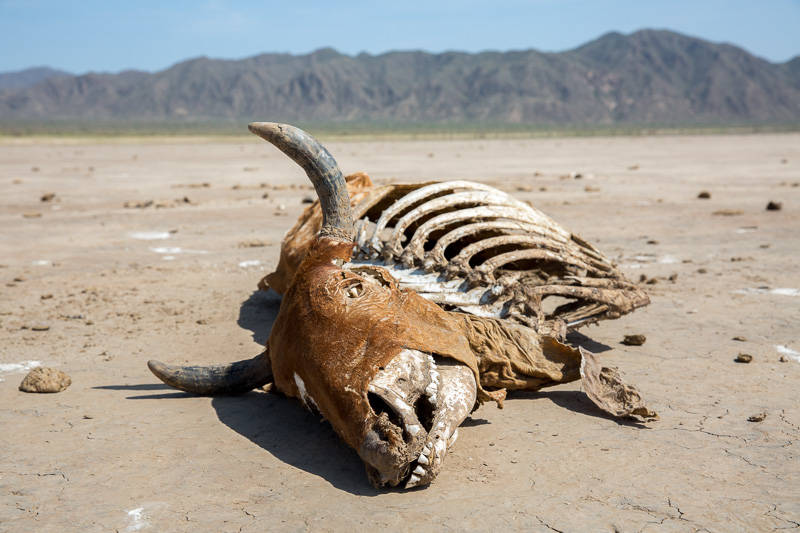 After setting up camp, the team got to work on putting the Land Yachts together from the pieces that had travelled thousands of kilometers to get there on the roof of Bruce’s Defender.

Just as the sun was setting in the distance to relieve us all of the relentless heat, both Land Yachts were lifted onto their wheels with cheers from everyone! 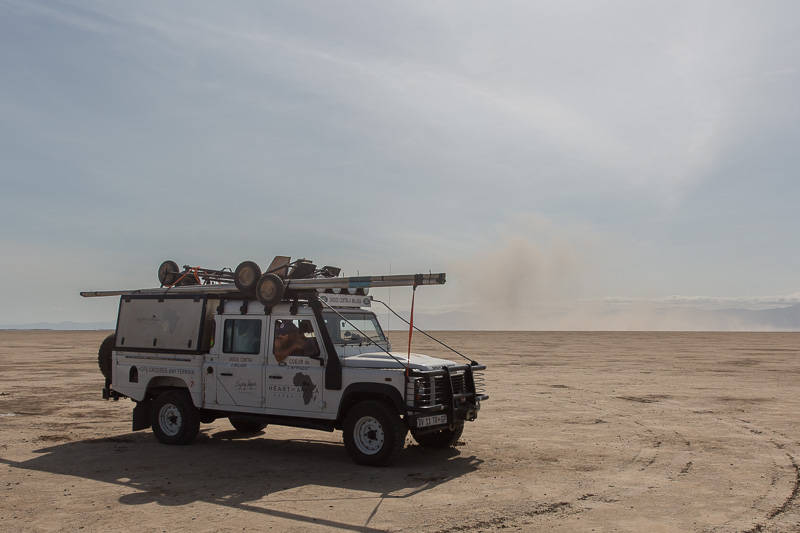 Our luck was in too because as we got them lifted, we got a breeze of wind pick up and it was enough to test out the rigs to ensure all was working for the adventure that would kick off in the morning with enough wind.

The light didn’t last long, but fun was had by everyone, including myself as I got to glide up and down the desert in a Land Yacht. It was absolutely exhilarating! 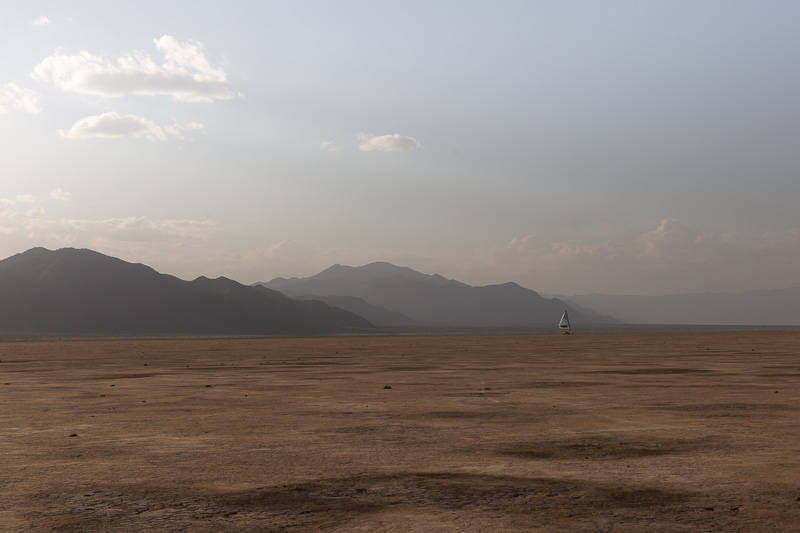 When the sun arose the next morning, there wasn’t a breath of air and as it rose higher and higher into the sky, the hotter it got. Within no time, we were having breakfast in 35 degree heat at 7am with strategies being spoken about how the day was going to work once the wind arrived. 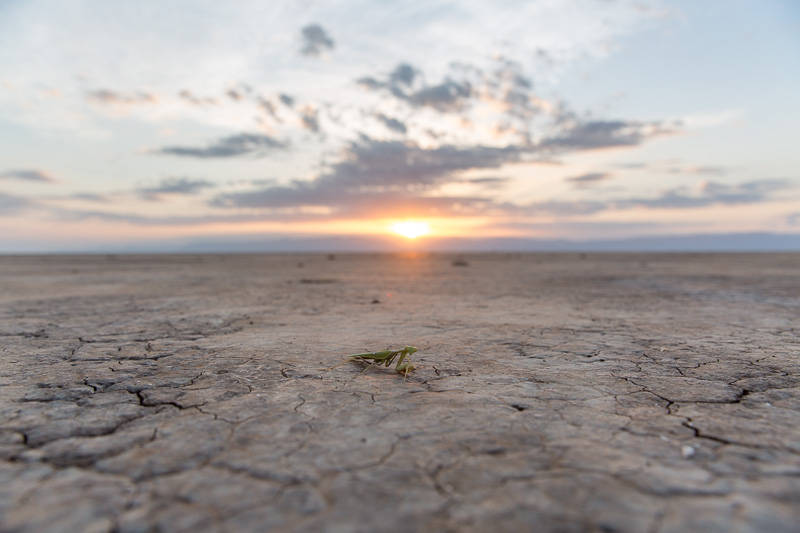 This was my view as I stuck my head out of my tent in the morning. 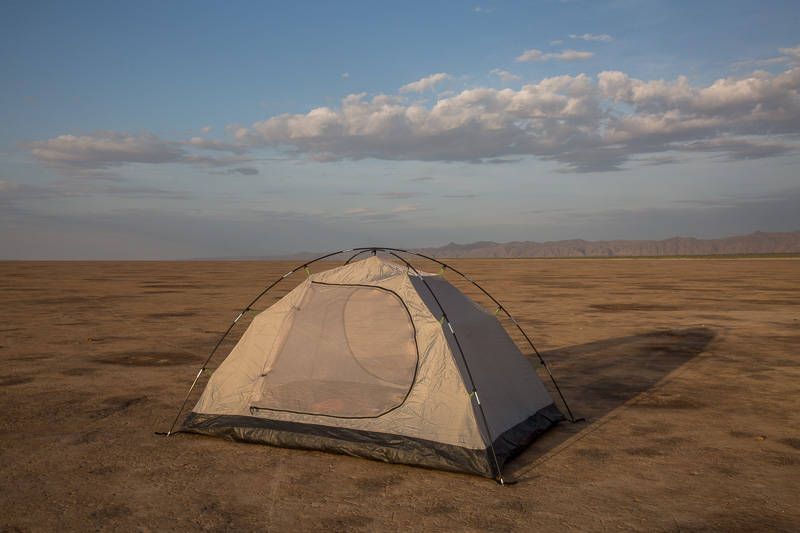 We waited and waited, and as we waited it got hotter and hotter with dust devils starting to rise in the distance, mirrored by the desert heat mirages, but the wind just stayed out there.

After some time, Kingsley broke out into a dance to the Wind Gods and oh boy did they listen!! Later that day, Ross & Anna were sailing down the desert at 60km/h with Kingsley right up next to them! 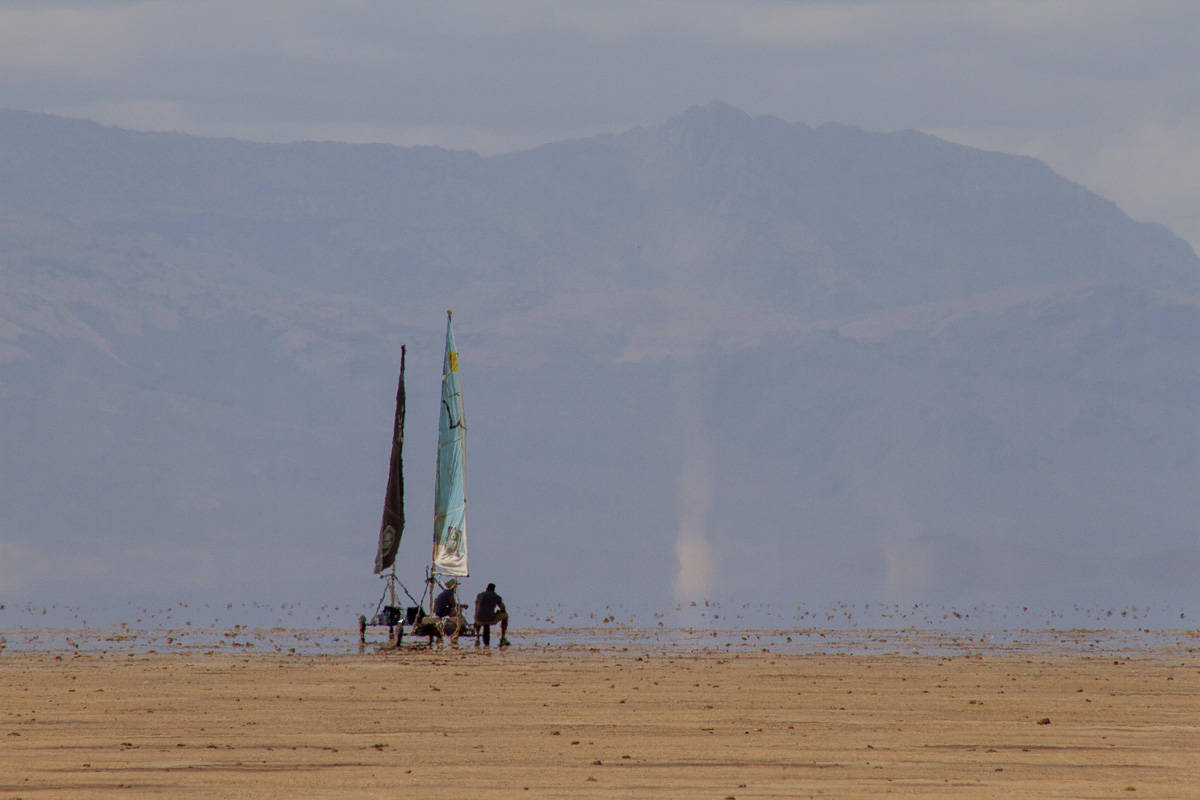 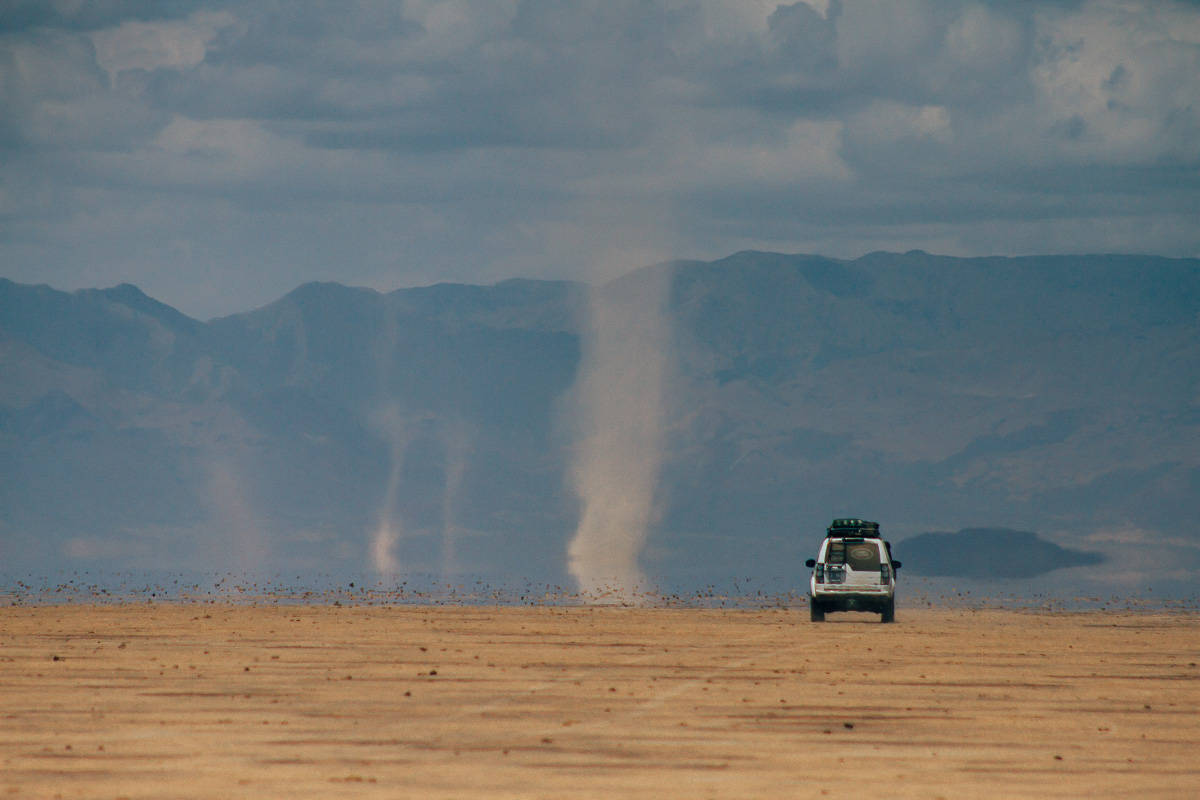 Here’s a video of the Wind Dance which will brighten your day for sure.

Oh boy, it was a sight to see Kingsley’s Beard blowing in the wind with a massive smile on his face, knowing they’d achieved what they came to do and after this, they could start heading back to South Africa with stories to tell for years to come! 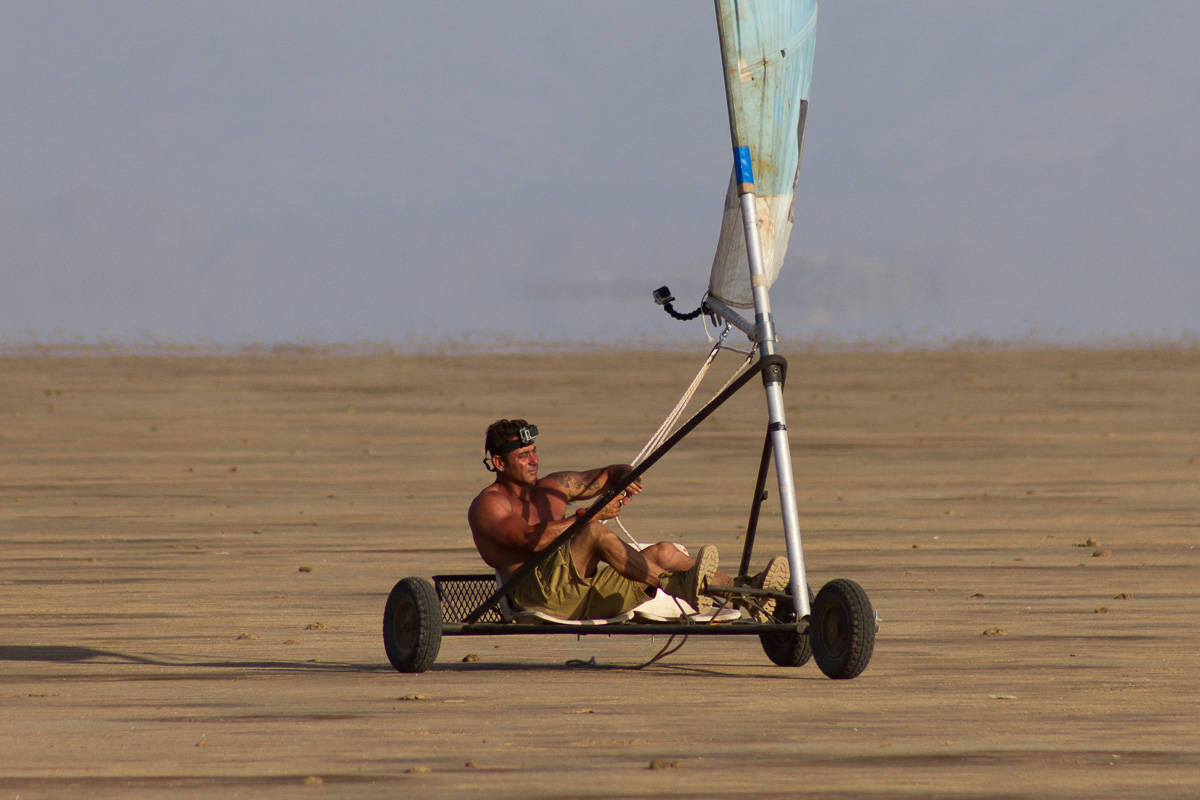 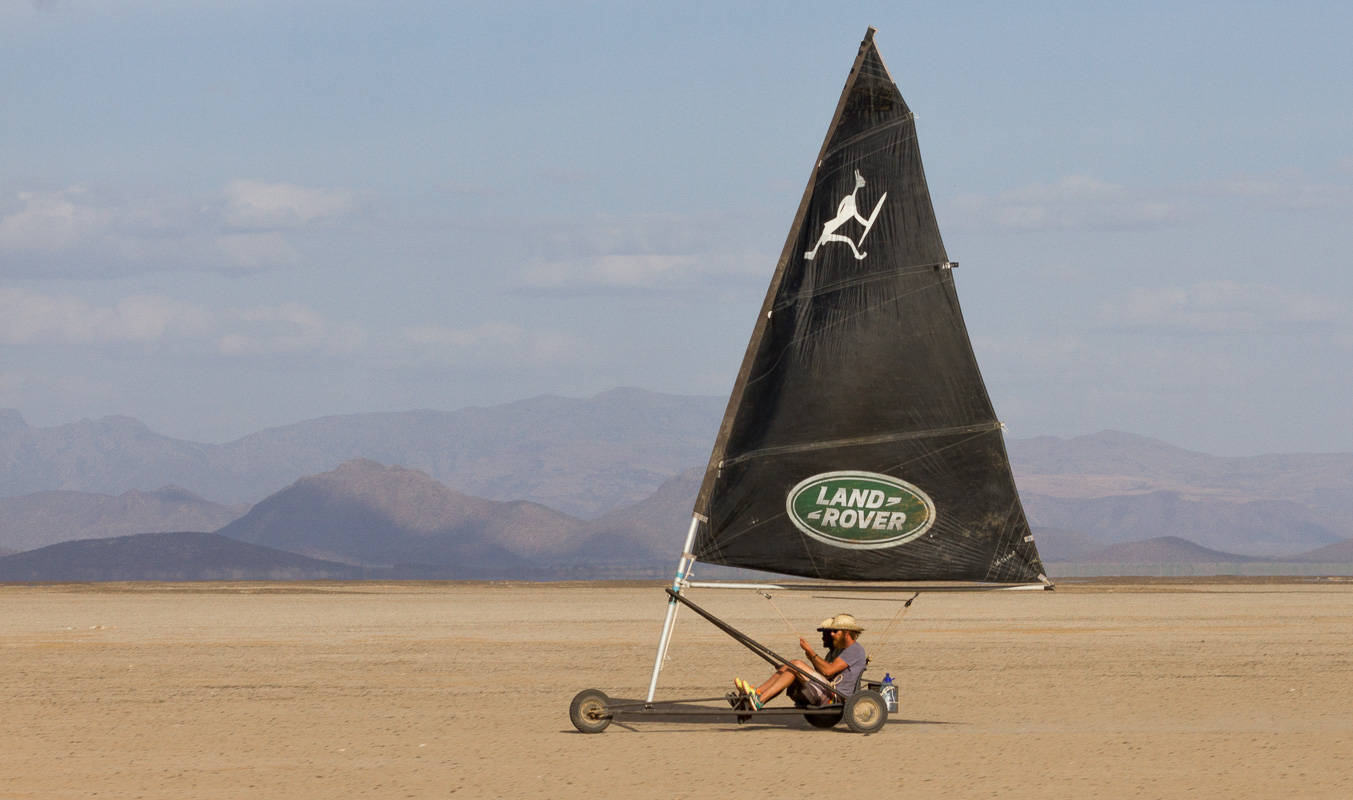 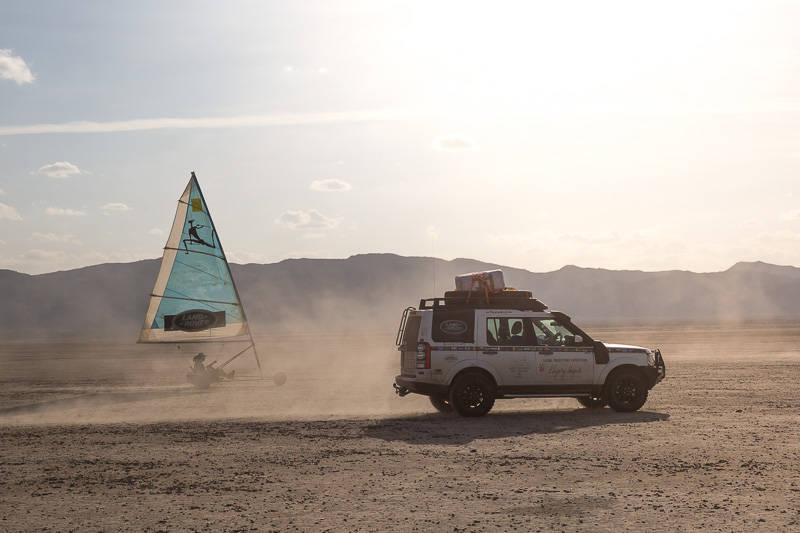 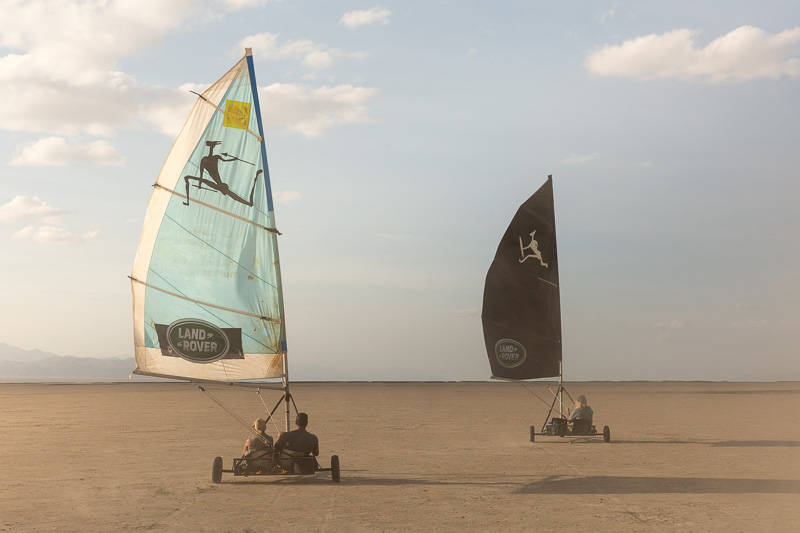 As they sailed, we followed in the 3 support vehicles, all the way to the Kenya / Ethiopian Border where I got to shake hands with this legendary explorer with one foot in Kenya and the other in Ethiopia, to congratulate him on a job bloody well done!! 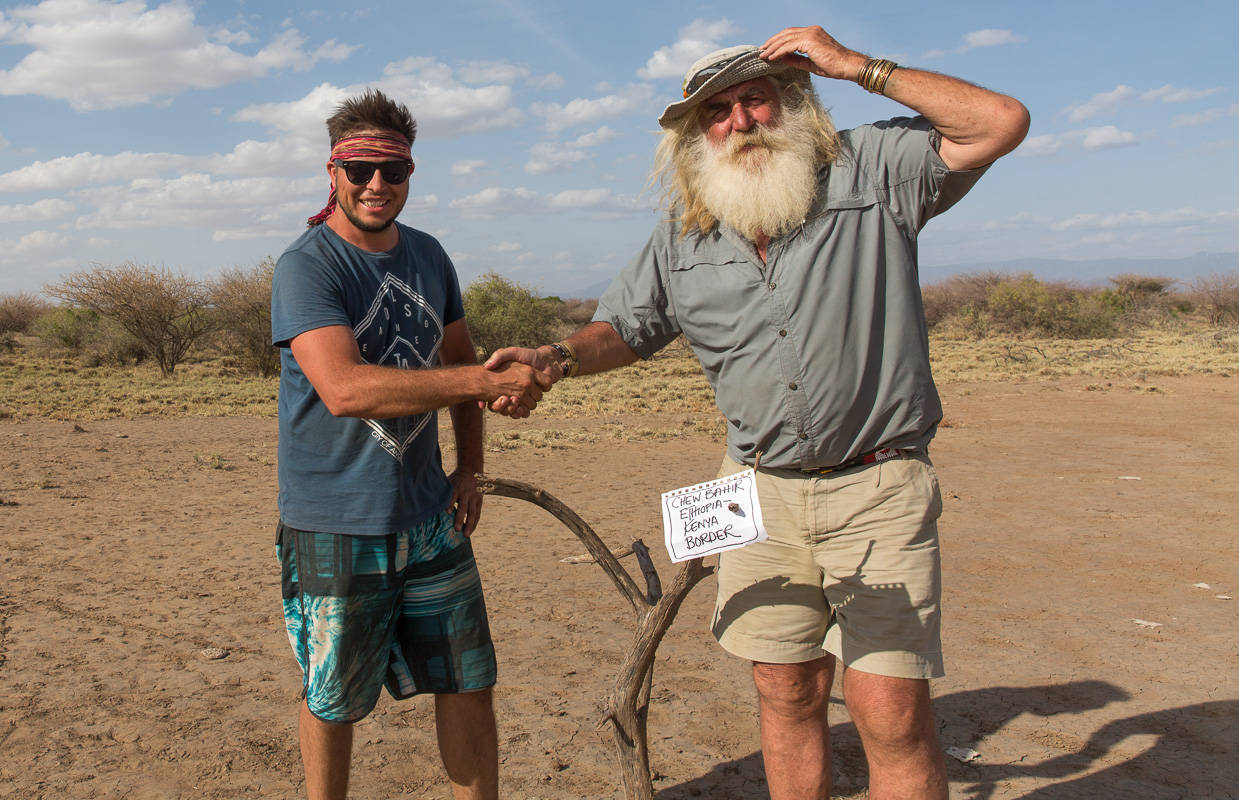 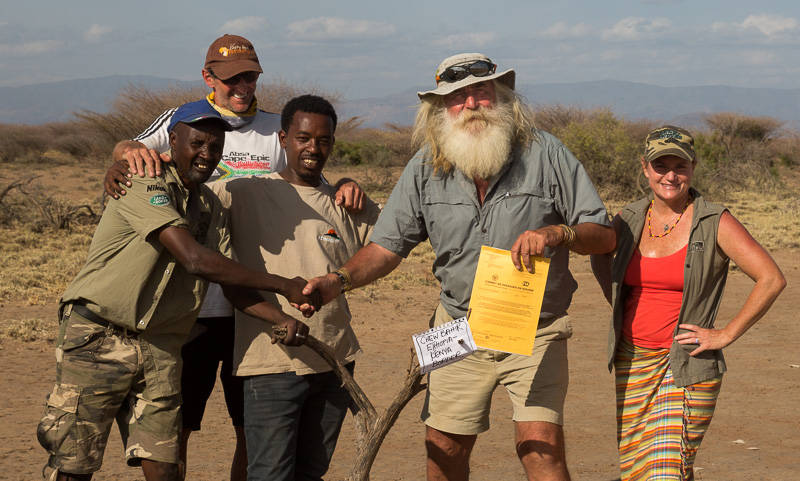 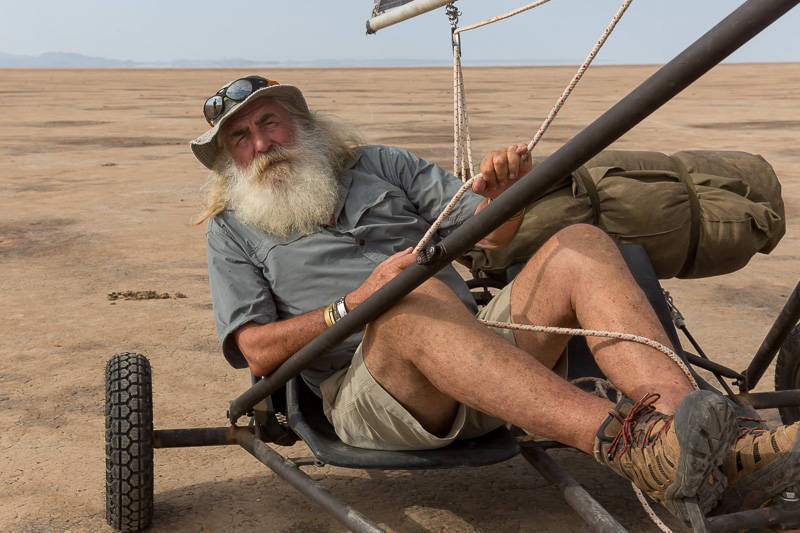 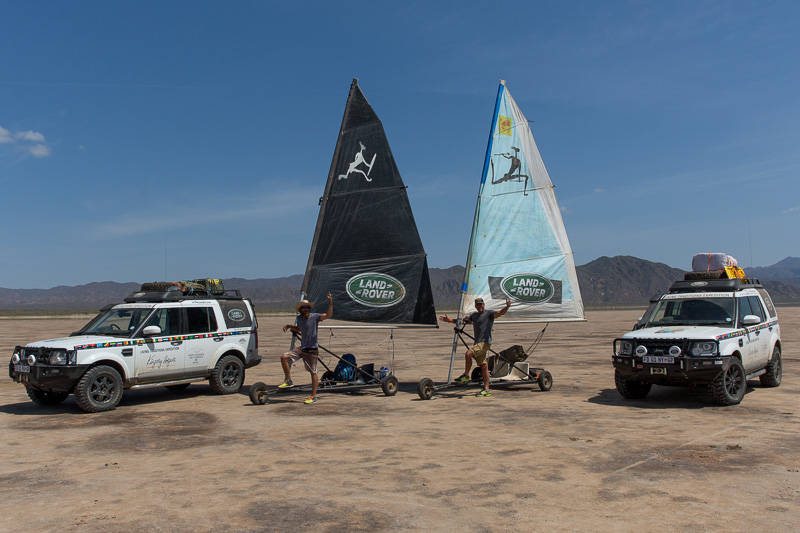 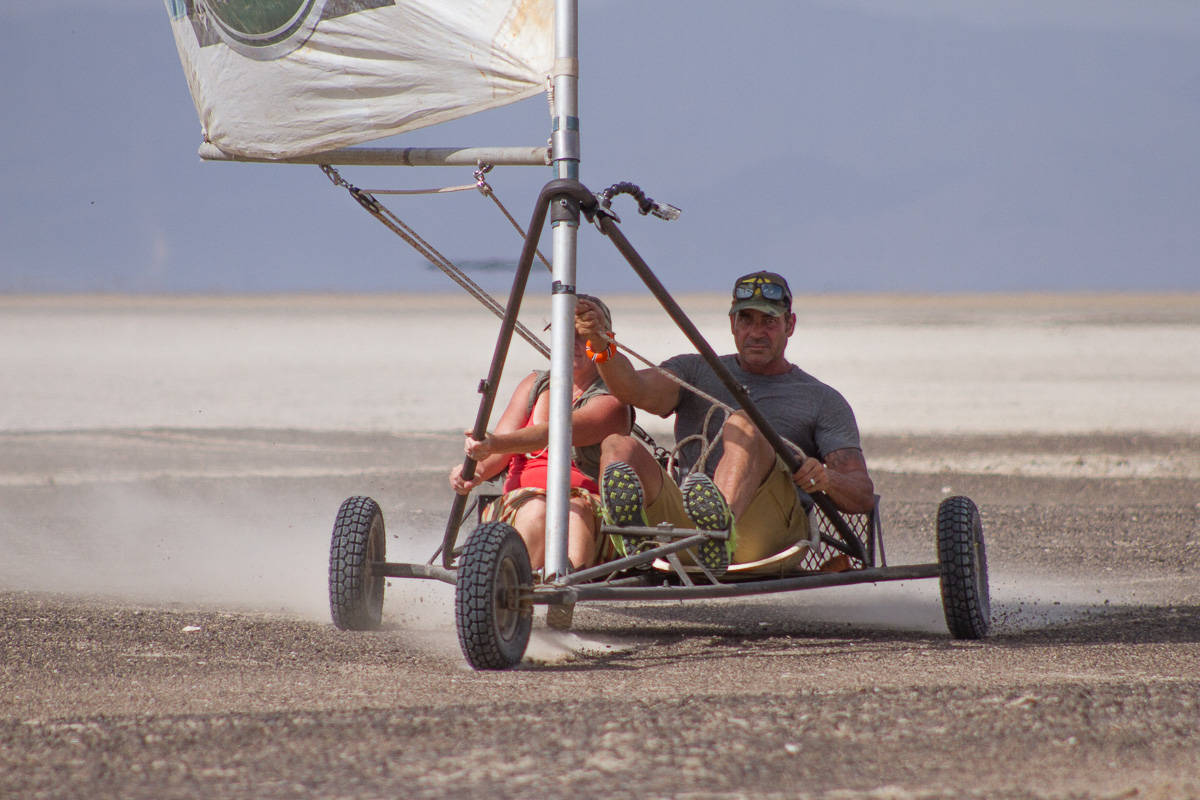 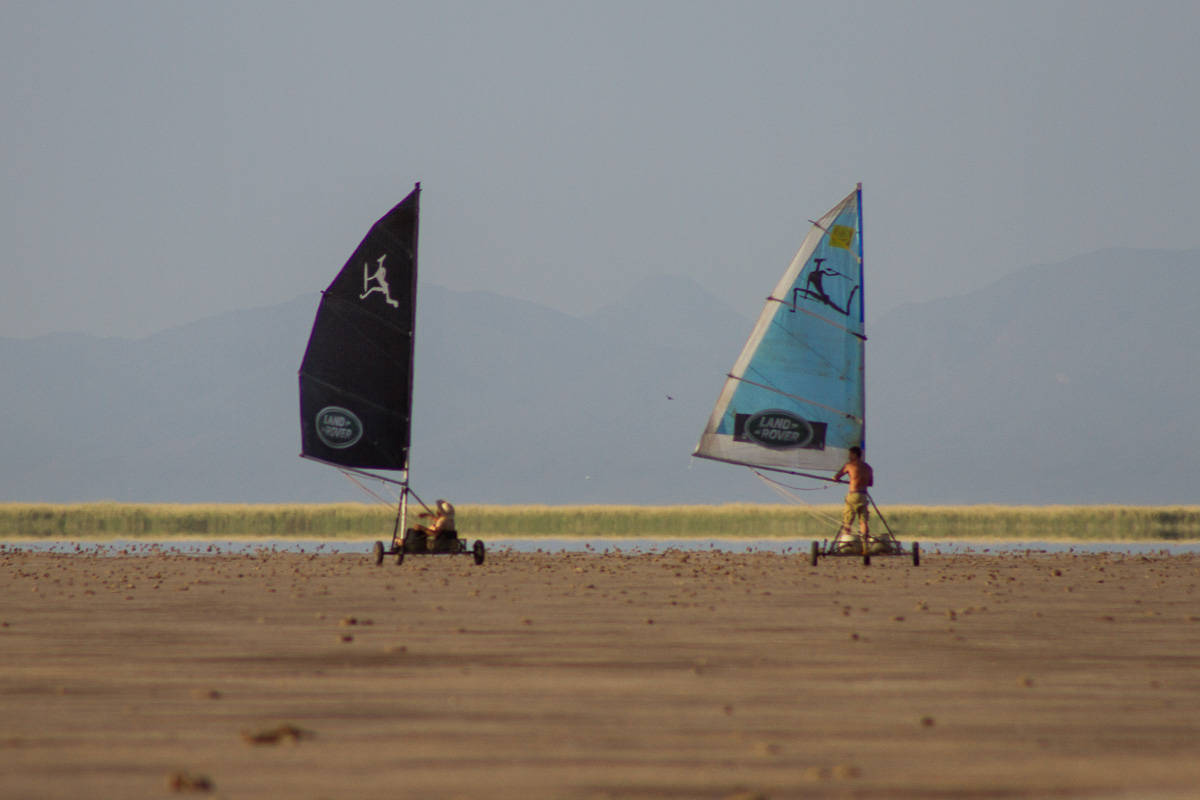 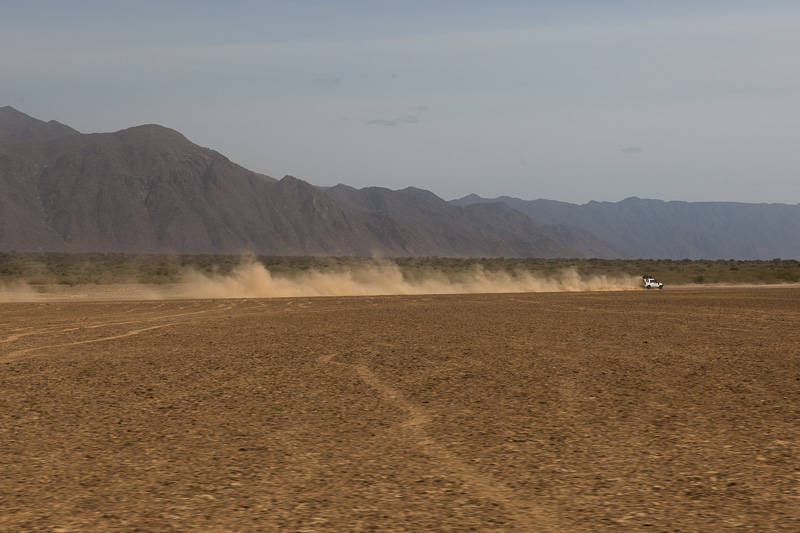 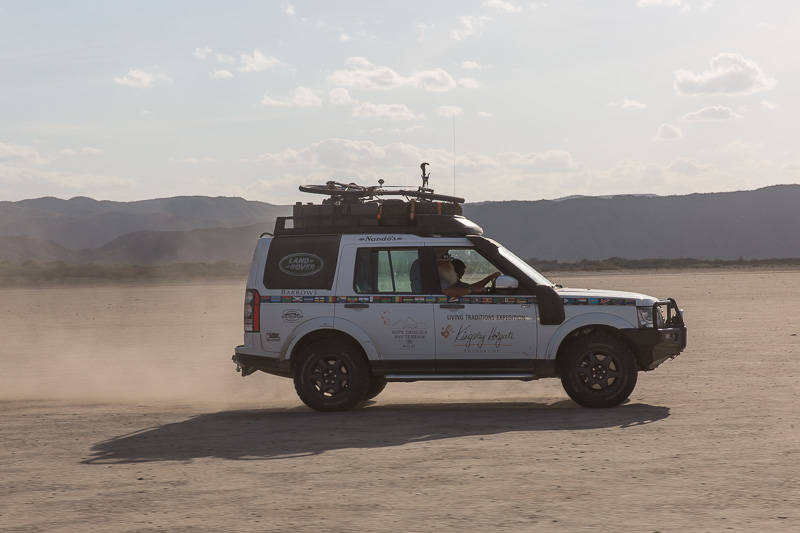 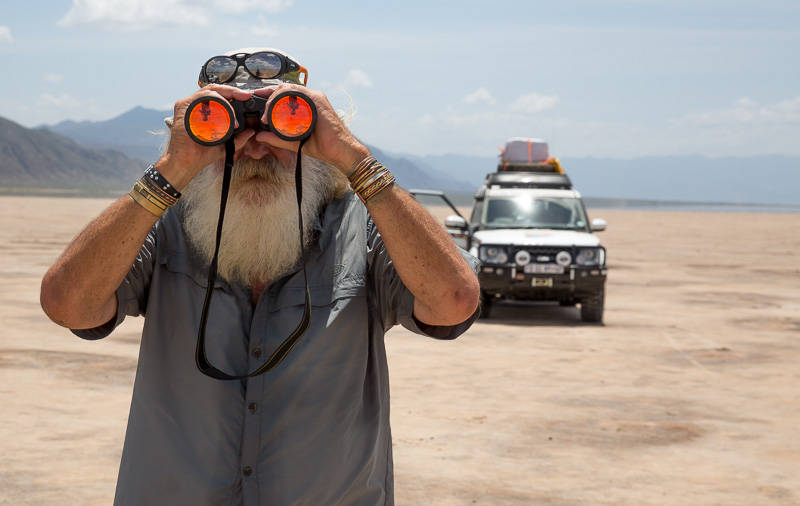 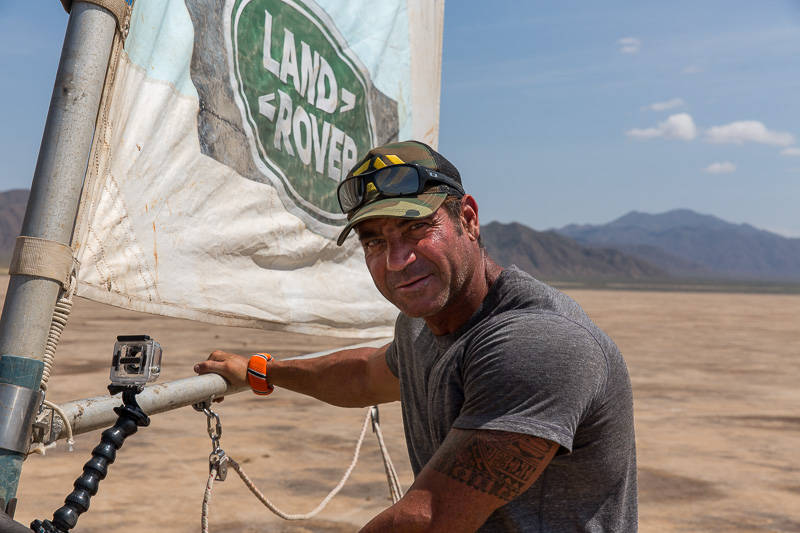